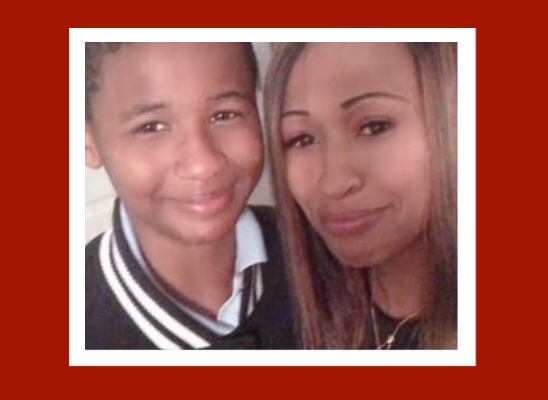 I will never forget my son Johnnie’s first day of middle school. We had gone through his new morning routine together, and he was going to do the afternoon on his own. As I waited excitedly for him to open the door with his new key, I was surprised by a knock at our front door. I remember opening it to find Johnnie standing with two police officers, his face wreaking of horror.

One of the men attempted to kindly explain, “Ma’am we found your son walking in the neighborhood. He got lost on his way home from school…” Before he could finish, my son plunged forward throwing himself in my arms and broke down sobbing in a manner that wouldn’t seem to make sense for what was happening. He hadn’t done anything wrong and these officers were aiming to be friendly by helping him to not get lost in the future. Despite their good intentions, interacting with police officers was terrifying to a black boy who has heard one too many stories about children, just like him, being gunned down by the very officers who are supposed to keep them safe.

Trayvon Martin, Tamir Rice, and Jordan Edwards are household names in our community. Black boys, perceived as threatening, and consequently killed for the color of their skin. Black parents know well that preparing our sons to do whatever they are told when they encounter officers of the law is a part of our job. Training them to remain calm , speak when spoken to, not to reach for anything, or make sudden movements is not a matter of guilt or innocence but of life and death. But these boys were not driving, they were playing in the park, walking from the store, and riding home from a party. Much like what we witnessed in the recording of George Floyd’s murder, the temperament of one police officer, can determine whether they live or die.

These senseless killings are a stain on our democracy. All lives do indeed matter which is exactly the premise of the mantra for this movement. It is a plea to have black lives valued like everyone else’s. We want our babies to be treated like other children. We want any man or woman who comes in contact with the law to be treated humanely and given their due process rights like every other American citizen.

The countless videos and reports publicizing a truth we have lived with since slavery failed to provoke any outrage leading to change. Watching a little boy get blown off his feet from gunfire while playing in the park did not ignite a collective outcry from our civilized society. Instead, black people have been expected to swallow their grief and bear this burden alone, lest we make anyone feel uncomfortable. Until now, the repeated heartbreak, devastation and trauma, we experience with every new case, was being comfortably ignored.

History demonstrates that black lives, young and old, simply are not valued in America. Forever etched in our memories is the “notorious” murder of fourteen year old, Emmett Till. In the summer of 1955, this young man visited his relatives in Mississippi. While there, he would encounter Roy and Carol Bryant at a local store one August afternoon. Before he could return home from his summer trip to his family in Chicago, Emmett would be kidnapped, beaten beyond recognition, tortured and shot in his head.

The mutilated body of a fourteen year old boy, bound with barbed wire to a cotton gin fan, was then thrown in the Tallahatchie River. The two white men accused of his killing were acquitted (by the all-white, all-male jury pictured below). Having never spent a day in prison, J.W. Milam and Roy Bryant, would later confess to killing Emmett, and Carol Bryant would admit that the alleged offense that resulted in his life being brutally taken, never happened.

Mamie Elizabeth Till sobbed over her baby’s mangled body with a wince that I feel in the pit of my stomach whenever I lay eyes on that photo. His mother, an educator and activist, had the strength to hold an open-casket funeral service. She chose to expose the plight of our people. By allowing Jet to photograph and publish what had happened to her son, the world was able to witness in an unforgettable way exactly what was taking place within America. Although they gasped with disbelief at the savagery then, here we are 65 years later and it is still happening to black people, to black children, in America.

Can we really judge Emmett’s murderers and the jury who failed to serve the justice due? How was it that we were content with watching this happen again… and again… and again? Why wasn’t everyone outraged? Why was it okay to see Black Americans repeatedly victimized to this day? Clearly, whatever we were doing in response has not changed anything. Isn’t there a definition of insanity involving doing the same thing repeatedly, expecting a different result? We would be crazy not to react!

George Floyd’s murder was our breaking point. It was becoming too common to watch live killings of black people with no promise of justice. Occasionally, someone receives a slap on the wrist but nothing tantamount to the mothers and fathers who are left aching for their children forever. And please don’t mention Dr. King. I do not condone violence, but exactly how did remaining peaceful work for MLK? Did his style of protest result in him being regarded and treated as the loving and reasonable man he strived to be? No. He was shot and killed.

While we claim to be a global “leader”, setting the example for democracy that all others should follow, we have become blind to our own self-righteousness and hypocrisy. Time and again we leverage our armed forces to storm into foreign countries and rescue others from the hands of dictators. Meanwhile, we continue to ignore the cracks in our moral compass. George Floyd’s murder was the tip of the proverbial iceberg. The 9 minute knee on his neck was our ‘shot HEARD and SEEN ‘round the world’. Enough is enough.

It is time for America to stand up and call right, right and wrong, wrong. We can no longer afford to be silent while our lives remain in jeopardy. We will not be deprioritized on America’s agenda. This is everyone’s problem. No one is safe. We have police officers serving illegal warrants to murder women asleep in their own homes. For the love of God and everything that is good in this world,

“TAKE YOUR KNEE OFF OF OUR NECKS!”

This is the peace we need, and it is our most important demand.

No matter what your style(s) of protest, be it: marching; posting/tweeting; rallying; photographing (documenting); writing to inform; registering voters; lobbying elected officials with visits, calls, and emails; running for office, etc. your efforts matter! We need every kind of soldier to relentlessly make our voice heard and our position understood. It is our responsibility to keep this movement front and center until laws are enforced to stop the unlawful killing of black people.

We must continue to confront the leaders, places, and systems where we live, where we work, where we worship, where we go to school, and where we spend our money—unapologetically. Change is a non-negotiable. We can’t afford to overlook the magnitude of this issue. It is our babies, husbands, wives, brothers, fathers, and sisters who may be next to die without dignity and (God forbid) without justice.

We can let the anger subside, but our sense of urgency should not waiver. We can’t let this fire go out.

In community and solidarity,