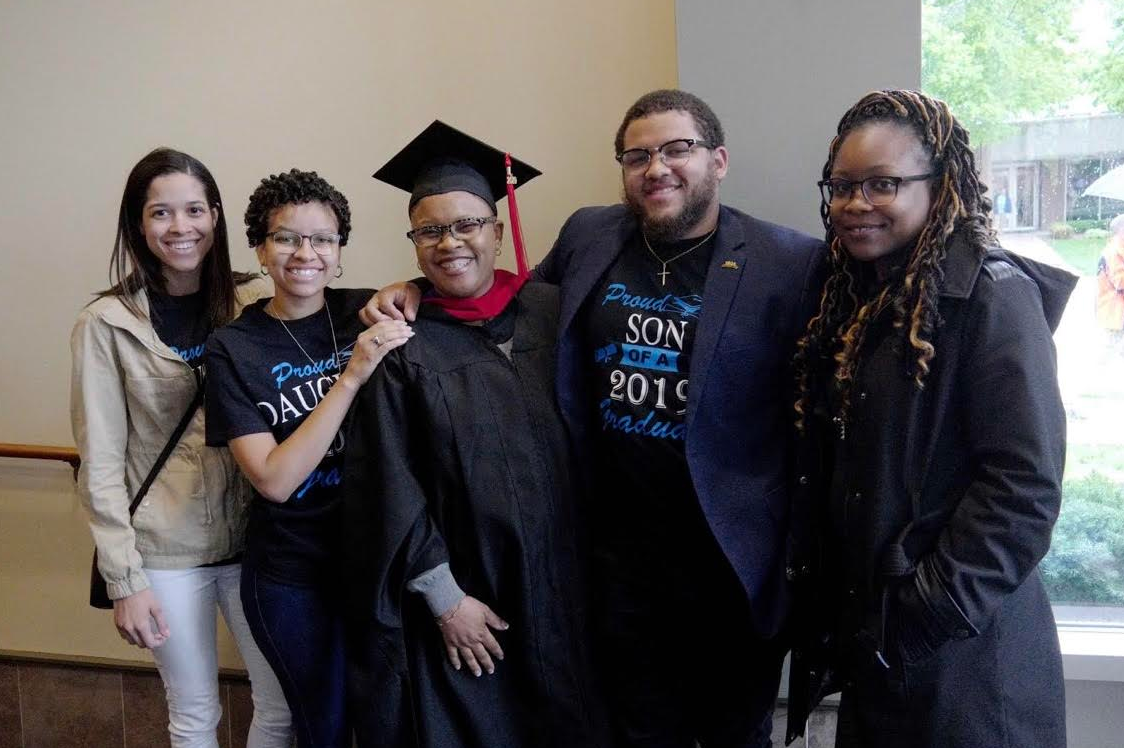 Tabitha Jackson has a wide range of experiences within the Chicago school system. She is a mother to five children in a blended family. All of her children have different educational needs and she feels strongly that as a mother, it is her job to choose the best school for each child.

Back when the school hunt began, she knew that charter public schools had a good reputation in Chicago. Her family looked at UChicago charter public schools, but there were no spots open for them. That’s when someone suggested Perspectives, which had a campus right down the street. She signed up her son, who had struggled with the structure of school in the past and after spending a few months at Perspectives, she saw a whole new person emerge. By the time he graduated from high school, he excelled academically and was a black belt in martial arts because of the love, structure, and sense of purpose that Perspectives gave him. After her son, her daughter attended Perspectives’ Joslin campus as well. The whole family had such a great experience there that they have stayed connected in many ways.

Even when her children were not attending Perspectives, she encouraged others to apply. Why? She believes in Perspectives’ principles, mission, and vision. She also believes that families should be able to choose the very best schools for their children, regardless of where they live or how much money they have. Mrs. Jackson eventually became a Perspectives recruiter. In her conversations with other parents and scholars, it has become clear that every parent wants what’s best for their child. Sometimes, it’s hard to find that right fit. But when it happens, it feels so good. She then became the 12th Grade Dean of Discipline at Perspectives Math & Science Academy – the role that she holds and loves right now.

But that’s not all – Mrs. Jackson is also a student herself. She didn’t go to college right after graduating from high school. And after many years, the thought of going back for a degree was intimidating. But when her daughter urged her to pursue her educational dreams, Mrs. Jackson went back to school for her bachelors degree and is now pursuing a doctoral degree.

She has supported Perspectives MSA  in so many ways – setting up a strong culture of love and respect before the pandemic hit Chicgo this year and continuing to use it as the basis for reaching out now that we are in the pandemic.

Setting up a culture of love and respect at Perspectives

In 2018, Mrs. Jackson became the Dean of Discipline of the 12th grade. In this role, she worked to ensure that all senior scholars were living according to the Perspectives principles with individual and small group instruction and support. The more specific support looks different for every scholar, because every person is unique, but one aspect of her work involved the identification of seniors who were struggling socially or behaviorally. Once identified, she helped them to come up with plans to check in with her and speak with other teachers on a regular  basis. Every week, she’d touch base with the scholars on their highs, lows, and what they could work on in the next week. Her goal was for each student to be invested in themselves and their accomplishments.  If students could do that and live by the Perspectives principles, then it would prevent them from the consequences of detention or suspension and catapult them to success later in life.  The work that she did was so much more than “discipline” – it was focused on mutual respect and the students living their best lives. Mrs. Jackson could be heard calling students by their last names to get them used to hearing it for when they became a CEO one day. She became so good at investing students in living their own best lives that under her watch, she helped suspension rates plummet to the lowest in the network.  On top of that, she spoke with parents and families to connect them to services.

And then the Coronavirus came to Chicago.

Perspectives had such a strong culture beforehand that it made moving into supporting each other during a pandemic just a little easier. Mrs. Jackson’s role has changed and has never been more important. Because she had such a strong relationship with students and their families before the pandemic, her very first calls to her seniors were to make sure that they and their families were all ok. She noted what they needed and found what they didn’t already have. She then moved into questions about the online learning program – if they’ve liked the program and their suggestions for improvement. Alongside continued check-ins with scholars and families, she is supporting teachers with e-learning and checking on students if they are not signing in for the day. She tries to keep things positive with motivational quotes and sayings during these trying times.

Mrs. Jackson believes that there is no excuse for a scholar to not be online, but we have to support each other to get there. Many scholars don’t have the internet. When members of Mrs. Jackson’s team see that a scholar hasn’t been online for a few days, they check in on the family and the internet situation and provide them with what they need.

The work that all schools are doing right now is more important than ever. Teachers and school staff are teaching and also finding other ways to help from afar. Mrs. Jackson knows that no one, no family can do this work alone. We all need to help and love each other to get through it. That is what Mrs. Jackson is providing to her students.