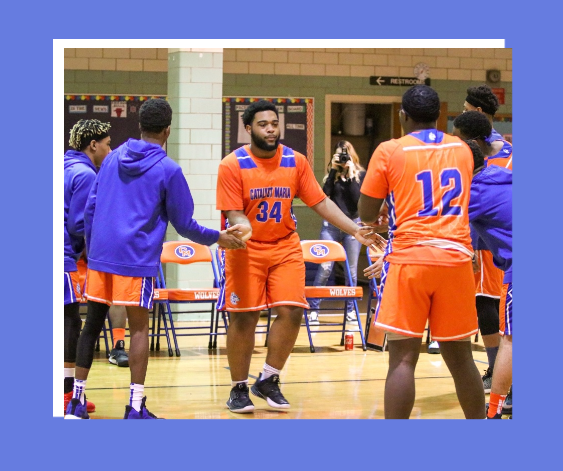 This Catalyst Maria Scholar Stands Up for What is Right

Micheal Wiley is a Catalyst Maria graduating senior in the class of 2020. He has received a full tuition scholarship to Adrian College through a unique partnership with Project Intersect – an organization that a former Catalyst teacher, Taylor Docking, created with his father, who is President of Adrian College. Micheal has done a lot throughout his time at Catalyst Maria that really established himself as a leader and helped others.

First of all, Michael is an advocate who stands up for what is right. In his own words:

“The injustice and the protests around us right now are helping kids my age to really learn about what’s been happening to us for hundreds of years. We are not OK with it. We will change it for the better. Whether change happens within my lifetime or after, everyone deserves to be treated equally and that’s what I fight for.

What I believe is the most important and what I tell my friends and classmates is that it is important to stay unified in what we believe and what we know is right. Even if it’s hard, be your own person and change what you believe is wrong, even if it’s been one way for hundreds of years.”

As a scholar, Micheal has an outstanding academic record. He is a member of OneGoal, a 3-year support program where he works with one of our teachers to maintain high grades and gain skills needed to successfully complete college. Not only is he a member of the program but he’s also a member of the OneGoal Fellow Advisory Board, which is a paid position where he gives feedback to OneGoal about their program model.

He also has an impressive internship resume. Micheal was a summer intern for two consecutive summers at the Art Institute of Chicago. During his senior year, he was a “Senior Intern” at school. In this position, he helped coordinate various student events across the school, from pep rallies to other whole-school assemblies. He also served as an intern to the Middle School Culture Team. He helped organize materials for middle school testing, events, and detention. He mentored students K-8. In addition, he observed some students who needed extra support and gave feedback to their teachers for how they were doing in their classes. He also helped track absences and tardies in middle school.

In his “free time,” Micheal also participates in sports. He was captain of the football team at Catalyst both last year and this year. He was also on the varsity basketball team.

Additionally, Micheal works at the “Catalyst Closet” – the Catalyst Maria school store. Last year, Micheal didn’t have a job, but frequently went to the store before football practice. He started to volunteer there and eventually became an employee. What he loves most about working at the store is getting to know the other Catalyst Maria students outside of school. In class and on the field, he only interacts with high schoolers, but at the store, he gets to know students from kindergarten and up!

When asked about what motivates him, Micheal says, “A lot of the work that I do is really for the love that I have for Catalyst Maria. I want  to give back to the school that has given so much to me.”

Adrian College, watch out – Micheal Wiley is about to take campus by storm!