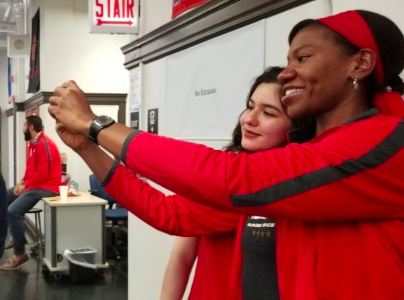 By Linda Lutton for WBEZ

“Students at Bulls College Prep gather around math teacher Delaina Martin before class. Martin is among 20 educators named “distinguished teachers” by the Noble Network of Charter Schools. All will receive $10,000 bonuses above their base pay every year they continue as teachers with Noble. Before class one recent morning at Bulls College Prep, math teacher Delaina Martin was swarmed by teenagers. One boy wanted her to see a drawing he made. Another told her he was a finalist for a student leadership position. The seniors — it was their last day of school — stood in line to pose for selfies with her. Martin is not just popular with students. She’s one of 20 teachers the Noble Network of Charter Schools named to its “Distinguished Teacher” program — out of a teaching force of some 800 educators at 18 Chicago campuses. The elite designation also comes with a $10,000 bonus, renewable annually for as long as the educators remain as teachers with Noble, Chicago’s largest charter school network. The program seeks to solve a problem that plagues education: how to identify, reward and hold on to top teachers, who are often drawn to higher pay in educational leadership positions — or outside education altogether. Teacher retention has been a particular problem among charter schools.”

Nearly 40 Chicago schools, including charters, would get building boost from state capital plan

By Cassie Walker Burke for Chalkbeat

“Nearly $60 million could be funneled to nearly 40 Chicago schools for new buildings, playgrounds, gyms, windows, turf fields, fire safety equipment — even replacement desks — according to Chalkbeat analysis of Gov. J.B. Pritzker’s $45 billion capital spending bill. Half of that would go to a charter school, the Archer Heights-based Academy for Global Citizenship, which would receive $31 million for “capital improvements.” The school sits in the district of Antonio Munoz, the assistant majority leader of the state senate. It was already slated for a new building designed by reputed Chicago architect Jeanne Gang. What’s more, another $200 million will pass through the state board of education to be divvied up for maintenance and repairs to schools across the state. The capital bill, which is awaiting the governor’s signature, lays out $415 million in all for maintenance, repairs, and upgrades to K-12 schools across Illinois, including charters and private schools. It sets aside $111 million more in construction grants to early childhood providers… Another big beneficiary is the Noble Network of Charter Schools. Three of its campuses would receive grants totaling $2.75 million for fire safety improvements, air conditioning, and a gymnasium renovation and expansion. Matthew McCabe, the chief of staff for Noble, said leaders there were “thrilled” with the news. “Since charter public schools haven’t traditionally received capital funding from the district, parents and community supporters have advocated for years for these funds,” he said in a statement.”

By Fran Spielman for the Sun-Times

“The new Chicago Board of Education that will hold down the fort until an elected board is seated will change the way it does business — in public, instead of behind closed doors, Mayor Lori Lightfoot said Monday. “The days where everything was done in executive session and then, they come out and take a vote — that’s over,” Lightfoot told a news conference at Lionel Hampton Fine & Performing Arts School, 3434 W. 77th St. “The majority of the work the school board does is gonna have to be in public. … Every single one of the members we’re proposing understands that transparency is the cornerstone of legitimacy. You can’t have legitimacy when you do everything in secret.”

By Philissa Cramer for Chalkbeat

“Education is getting new prominence in Chicago’s City Hall, as new mayor Lori Lightfoot names a deputy mayor focused on the city’s schools. Sybil Madison, one of four chairs of Lightfoot’s education transition team, will be the city’s first deputy mayor of education and human services, Lightfoot announced Monday. Lightfoot’s predecessor, Rahm Emanuel, at times had a chief of staff tasked with leading City Hall’s education agenda, but the new position elevates the role to the second-highest level in city government…Madison directs the Chicago City of Learning, a coalition of youth organizations focused on connecting students to learning opportunities. She is also a research associate with Northwestern University’s Office of Community Education Partnership and a former official at Chicago Quest Schools, a charter operator running part of Chicago International Charter School. She also served with Lightfoot on the city’s Police Accountability Task Force.”

By Yana Kunichoff for Chalkbeat

“She’s only been on the job for less than four months, but state education board President Carmen Ayala already is moving toward overhauling the state’s controversial testing system. The plan, Ayala told Chalkbeat in a conversation on Wednesday, is to replace the patchwork of state tests that students take from kindergarten through high school, and replace them with one coordinated type of measurement. “The vision for state assessments is to have a pre-K-through-12 system that addresses literacy and math so we don’t have gaps in grades,” said Ayala, who previously was superintendent of west suburban Berwyn North School District 98. “Can we look at a child who entered in kindergarten, really look at their longitudinal journey, and tell where the success points and interventions were?”  Ayala has asked for a $3 million evaluation in the next school year of the various tests students take as part of the state assessment system.”

By Chip Mitchell for WBEZ

“She (Carolyn Dyson) stands hardly 5 feet, 5 inches, and petite at that. She wears a neon yellow vest but carries no equipment except for a cell phone. She gets paid little more than the minimum wage. But Dyson is part of an army of Chicago civilians with deep roots in their neighborhoods who are employed to help suppress violence near schools, so children can move safely. As the city prepares to expand this program, called Safe Passage, a slew of new academic research suggests that is a wise investment.”